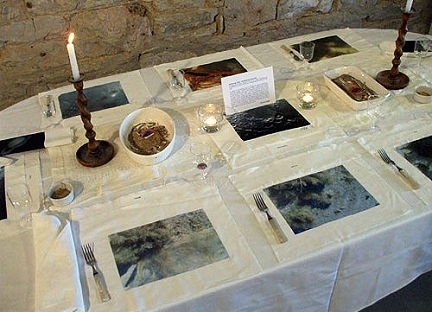 Using  deep-space photographic images and finding a suitable medium directed the research towards urban / household dust. Images include the M51 Spiral Galaxy,  an Occultation of Saturn by the Moon, Saturn after the Occultation, the Moon Surface and Venus.

The rationale for this synergy (terrestrial dust and deep space images) refer to the long-gone stardust that hatched the solar system and which constitutes our very being.  Our  astral heritage, as human beings, consist these borrowed elements, iron, carbon, sulphur – which, though they  slip away after death,  meanwhile manifest a rich and diverse humanity.  A humaity as infinite as the 200-400 billion stars in the Milky Way Galaxy alone.

House-hold dust, unlike interstellar particles used in this installation, is a mix of dead insect parts, flakes of human skin, shreds of fabric, detritus and debris and  which is also (culturally) considered vile  in different degrees.  Mary Douglas is quoted as saying that dirt is only matter out of context.  She contends that people flee dust and dirt because they are the detritus of cultural constrictions of order, and constitute an inchoate state of being, a type of moral defilement.
Dust knows no boundaries – either cultural or biological -  and therefore becomes metaphor for humanities common existence and evolution.

The table installation  consists: place settings for a variety of categories of dust and dirt along with deep space photographic images

Awards: Arts grant for concept that felt making, the process and product, is a metaphor for social diversity.  …………